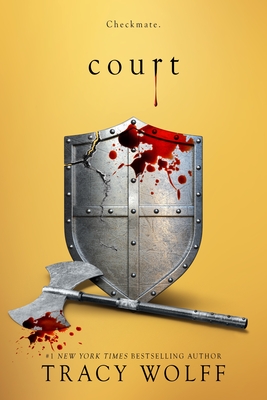 This is book number 4 in the Crave series.

No one survived the last battle unscathed. Flint is angry at the world, Jaxon is turning into something I don’t recognize, and Hudson has put up a wall I’m not sure I’ll ever break through.

Now war is coming, and we’re not ready. We’re going to need an army to have any hope of winning. But first, there are questions about my ancestors that need answers. Answers that might just reveal who the real monster is among us.

And that’s saying something in a world filled with bloodthirsty vampires, immortal gargoyles, and an ancient battle between two gods.

There’s no guarantee that anyone will be left standing when the dust settles, but if we want to save this world, I have no choice. I’ll have to embrace every part of me...even the parts I fear the most.

Don’t miss a single book in the series that spawned a phenomenon! The Crave series is best enjoyed in order:
Crave
Crush
Covet
Court
Charm
Cherish

New York Times and USA Today bestselling author Tracy Wolff wrote her first short story—something with a rainbow and a prince—in second grade. By ten, she’d read everything in the young adult and classics sections of her local bookstore. A one-time English professor with more than fifty novels to her name, she now devotes most of her time to writing and dreaming up heroes. She also writes under the name Tracy Deebs and lives in Austin, Texas, with her family. Visit her online at tracywolffbooks.com.