The Meltdown (Diary of a Wimpy Kid Book 13) (Hardcover) 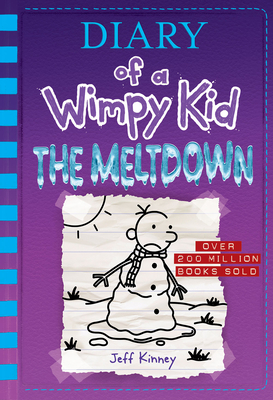 The Meltdown (Diary of a Wimpy Kid Book 13) (Hardcover)

This is book number 13 in the Diary of a Wimpy Kid series.

When snow shuts down Greg Heffley’s middle school, his neighborhood transforms into a wintry battlefield. Rival groups fight over territory, build massive snow forts, and stage epic snowball fights. And in the crosshairs are Greg and his trusty best friend, Rowley Jefferson.

It’s a fight for survival as Greg and Rowley navigate alliances, betrayals, and warring gangs in a neighborhood meltdown. When the snow clears, will Greg and Rowley emerge as heroes? Or will they even survive to see another day?

Jeff Kinney is a #1 New York Times bestselling author of the Diary of a Wimpy Kid series and the Awesome Friendly Kid series. He is a six-time Nickelodeon Kids’ Choice Award winner for Favorite Book and has been named one of Time magazine’s 100 Most Influential People in the World. He spent his childhood in the Washington, D.C., area and moved to New England, where he and his wife own a bookstore named An Unlikely Story.