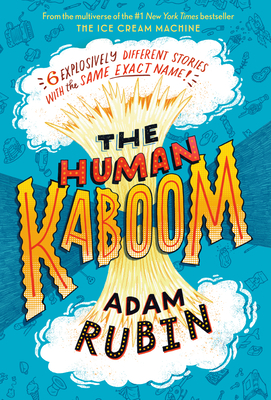 The author of the #1 New York Times bestsellers Dragons Love Tacos and The Ice Cream Machine returns with another hilarious, irresistible middle-grade collection of six totally different stories with the same exact name.

Adam Rubin is back with this companion to The Ice Cream Machine, inviting you into six thrilling new worlds filled with daring and danger, mystery and mayhem—not to mention explosions! In a swanky New York City hotel, a reclusive guest appears to have spontaneously combusted. On a school field trip to a human anatomy museum in space, two kids try to pull off the greatest prank in history. Somewhere on a deserted island, three siblings try to make a life for themselves after the rest of the planet has been decimated by gigantic rock monsters. And then there's the small, quaint fishing town where a boy visiting his sister stumbles across an ancient curse; the traveling circus where a young girl becomes the assistant to a death-defying human cannonball; and the rugged wilderness where one kid with superpowers just can't seem to find some peace.

Each story is illustrated by a different artist, including Marta Altés, Daniel Gray-Barnett, Rodolfo Montalvo, Daniel Salmieri, Adam de Souza, and Gracey Zhang, with black-and-white artwork that practically explodes off the page. So put on a helmet and hang on tight, because this unpredictable book will blow you away!
Adam Rubin is the author of a dozen critically acclaimed picture books, which have sold more than five million copies combined. They include Dragons Love Tacos, Dragons Love Tacos 2: The Sequel, High Five, Gladys the Magic Chicken, Secret Pizza Party, Robo-Sauce, the Those Darn Squirrels trilogy, and El Chupacabras, which won the Texas Bluebonnet Award. Publishers Weekly called his #1 New York Times bestselling story collection The Ice Cream Machine a "madcap middle grade debut." Visit Adam online at adamrubinhasawebsite.com and follow him on Twitter @rubingo.
Praise for The Human Kaboom:

"Rubin, a humorist with a flair for explosive prose and side-splitting gags, is in good form here: All the stories boast laughs, smart characterization, clever plotting, and explosive incidents . . . The gags are plentiful, the action is exciting, and the variety is commendable . . . Impossible to resist." —Kirkus Reviews