Who Was Edgar Allan Poe? (Who Was?) (Paperback) 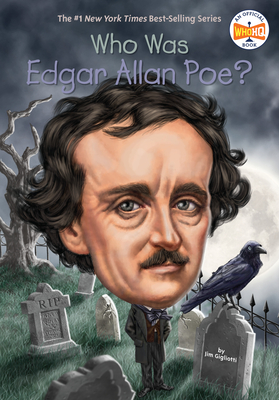 Who Was Edgar Allan Poe? (Who Was?) (Paperback)


On Our Shelves Now
Filled with broken hearts and black ravens, Edgar Allan Poe’s ghastly tales have delighted readers for centuries. Born in Boston in 1809, Poe was orphaned at age two. He was soon adopted by a Virginia family who worked as tombstone merchants. In 1827 he enlisted in the Army and subsequently failed out of West Point. His first published story, The Raven, was a huge success, but his joy was overshadowed by the death of his wife. Poe devoted his life to writing and his tragic life often inspired his work. He is considered to be the inventor of detective fiction and the father of American mystery writers. His work continues to influence popular culture through films, music, literature, and television.
Jim Gigliotti is a freelance writer based in Southern California. A former editor at the National Football League, he has written more than 50 books for all ages. His writing credits include biographies for young readers on Olympian Jesse Owens and baseball star Roberto Clemente.