The Sea Queen: A Novel (The Golden Wolf Saga #2) (Paperback) 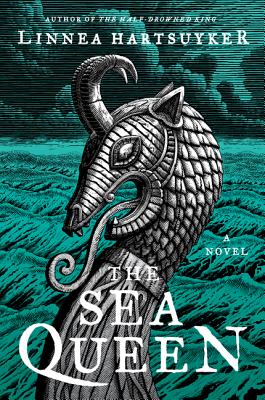 The Sea Queen: A Novel (The Golden Wolf Saga #2) (Paperback)

This is book number 2 in the The Golden Wolf Saga series.

Six years after The Half-Drowned King, Ragnvald Eysteinsson is now king of Sogn, but fighting battles for King Harald keeps him away from home, as he confronts treachery and navigates a political landscape that grows more dangerous the higher he rises.

Ragnvald’s sister Svanhild has found the freedom and adventure she craves at the side of the rebel explorer Solvi Hunthiofsson, though not without a cost. She longs for a home where her quiet son can grow strong, and a place where she can put down roots, even as Solvi’s ambition draws him back to Norway’s battles again and keeps her divided from her brother.

As a growing rebellion unites King Harald’s enemies, Ragnvald suspects that some Norse nobles are not loyal to Harald’s dream of a unified Norway. He sets a plan in motion to defeat all of his enemies, and bring his sister back to his side, while Svanhild finds herself with no easy decisions, and no choices that will leave her truly free. Their actions will hold irrevocable repercussions for the fates of those they love and for Norway itself.

The Sea Queen returns to the fjords and halls of Viking-Age Scandinavia, a world of violence and prophecy, where honor is challenged by shifting alliances, and vengeance is always a threat to peace.

Linnea Hartsuyker can trace her family lineage back to the first king of Norway, and this inspired her to write her debut novel, her trilogy about the Vikings. Linnea grew up in the woods outside Ithaca, New York, studied engineering at Cornell University, and later received an MFA in creative writing from New York University. She lives in New Hampshire with her husband.

“A seafaring epic with bloodcurdling raids and political intrigue to spare… Svanhild emerges as a complicated, talented, and shrewd warrior in her own right… Hartsuyker is a skilled storyteller, and the moral battles her characters wrestle with on and off the battlefield add compelling psychological depth to an old and epic tale.”
— Kirkus Reviews

“Hartsuyker’s second volume in her trilogy (after The Half-Drowned King) continues the saga of Ragnvald Eysteinsson… but Svanhild proves that Norse women can be just as vicious and cunning as Norse men…. this is an ambitious tale of Norwegian medieval warfare told in richly colorful and accurate historical detail. Hartsuyker’s novel reveals just how tenuous life is when disputes are settled with sword and battle-axe.”
— Publishers Weekly

“Through her multifaceted characters, Hartsuyker adeptly evokes female alliances, the complications of love and passion, and vengeance both terrible and triumphant as she effectively juggles many subplots and settings, from Norway’s harsh, picturesque coast to sulfurous Iceland and Dublin’s muddy harbor.”
— Booklist

“By the final pages, Swanhild has become that rare creature of historical fiction: a thoroughly believable female action-hero…At once a thrilling adventure story and a moving portrait of very complicated love. The Sea Queen is an even more accomplished novel than its predecessor and sets the reader keenly on edge for the next volume in the series.”
— Open Letters Review

“This is historical fiction at its best and shouldn’t be missed…Hartsuyker adds a rich, Shakespearean approach to characters and politics…All three main characters, Svanhild particularly, are so beautifully realized in their intelligence and emotional development that the descriptions of sea voyages, battles, and mead hall law-wrangling mesh seamlessly with the more personal stories.”
— Editors’ Choice, Historical Novels Review

“Hartsuyker is an amazing storyteller who brings Viking Norway to life, from the sea battles to the vivid landscapes. The closer I got to the last page of The Sea Queen, the slower I read, as I did not want it to end. I felt invested, wanting to know how Ragnvald and Svanhild would fare in the dangerous games they were playing…Hartsuyker tells a grand tale, and you won’t want to miss any of it. If you like historical fiction, Viking tales or, frankly, just a great story, these books are for you.”
— Book Reporter

“It is her wonderful cast of characters that truly makes The Sea Queen a page-turning, electrifying read…superb and engaging characters that you cannot stop thinking about even when the story moves from one to another.  I heartily and highly recommend The Sea Queen…For Fans of ‘Game of Thrones’ and of historical fiction.”
— Comic Book Bin

“A treat to savor…I thoroughly enjoyed reading THE SEA QUEEN and was once again immersed into Ragnvald’s world of loyalty, betrayal and complex Norwegian relationships. THE SEA QUEEN is a much better read than THE HALF- DROWNED KING. I loved seeing a strong and clever woman character in Svanhild. I also loved the pacing of the story and how it feels epic.”
— Fresh Fiction